Nestled among the salt marshes just inside the mouth of Guilford, CT’s West River, a visit to Brown’s Boat Yard can feel like a trip back in time.

It could be the location, situated between two state parks on the central north shore of Long Island Sound. It could be the weather-worn buildings which imply an enduring quality and character. Or it just might be the people at Brown’s Boat Yard, who favor conversation and connection over polished topsiders and starched button-down shirts. Whatever it is, our small marina and boatyard offers the visitor a rustic, practical and picturesque experience. Brown’s Boatyard was founded in the mid-1940s when Frank Brown left the family boatyard at Water Street for a location closer to Long Island Sound and, fortuitously, south of the railroad bridge spanning the West River.

Known for his Yankee thrift, Frank built the boatyard shop building from second-hand lumber formerly used in one of the churches on The Guilford Green; it’s the same shop used at Brown’s today. The yard employed two railways that were used to move boats about (as opposed to the 25 ton travelift currently used at Brown’s Boatyard).

Frank enjoyed about 25 years of boat building and repair business before deciding to lease the yard, in the early ‘70s, to Henry Snyder. Snyder made improvements to the facility, including adding seawalls and incorporating a fuel dock into the offering. However, Snyder was unable to make a go of it so Frank Brown took the yard back in 1977.

Not wanting the day-to-day responsibilities of running the operation, Frank convinced Bill and Tammy Green – who had a lobster hatchery on property just north of the Brown’s Boatyard – that it would be a great opportunity for them to lease and operate the growing (some might say overgrown!) yard. The Green’s first order of business was ridding the yard of abandoned boats; they bought a bulldozer and crane for this task and also relied on some very enthusiastic help from the town Fire Department. The Greens improved the yard by adding pole barn extension to the original building.

One of the Green’s boatyard customers was Dave North, who kept his 38’ 1938 Matthews at Brown’s Boatyard. He established a close rapport with the Green’s and eventually decided to leave his family’s insurance business to become the manager of the yard.

Dave began his tenure as manager in 1981 and by 1984, he had installed bulkheads on more of the waterfront, added a TravelLift and made considerable improvements to various yard buildings. He became owner of the yard and built a home on the property where he raised his family and still resides today. He owned the yard for 30+ years.

In November 2017 Dave decided he was ready to retire. General manager Hank Robinson and his wife Amanda decided it was time to dive in and are now owner’s and operators of Brown’s

Boatyard. Hank started his career fixing boats when he was still in high school. He has over 15 years experience working in the field. He is a top notch mechanic and proved himself fitting as general manager for 6 years. Amanda became the office manager in 2016 after welcoming their daughter into the world. They work as a team and have continued to maintain a thriving business doing repairs, improvements, summer marina activities and winter storage. They are able to be successful with the help of Dane Lawrence, Don Kacenski, Mike Winslow, and Emery Mazo. Brown’s Boatyard owner and general manager Hank Robinson was born with a wrench in his hand. Literally. His dad gave him one as a rattle. As the son of an automotive mechanic, Hank began taking things apart at an early age and, luckily for all of us, started putting them back together shortly thereafter.

Hank started working at Brown’s Boatyard as a freshman in high school, riding his bike over after school and during the summer. He was bit hard and early by the boat bug, earning his Master Captain’s license at age 19. During his 15 years in the business, Hank has worked on an ocean-going tugboat, spent 6 years working in a ‘big commercial yard’ and has been back at Brown’s since 2011.

While experienced and having expertise across the gamut of boatyard work, Hank takes particular pride in his marine mechanical capabilities. He has solved engine problems across a variety of makes and models but if you have a Yanmar, Yamaha or Mercruiser maintenance or repair issue, Hank is definitely your man. After hanging around at Brown’s Boat Yard since he was in 8th grade and working with us during his summers off from college, we are pleased that Dane Lawrence has joined us as our assistant manager and full-time boat detailer (along with every other task imaginable). The Guilford native is just back from a training certification course on FlightShield Polymer protectants; he knows how to protect your vessel from the corrosive sun and salt water environment. In his spare time you will find him hanging out on his boat (if it’s any bit warm) or up in the hills of Vermont. 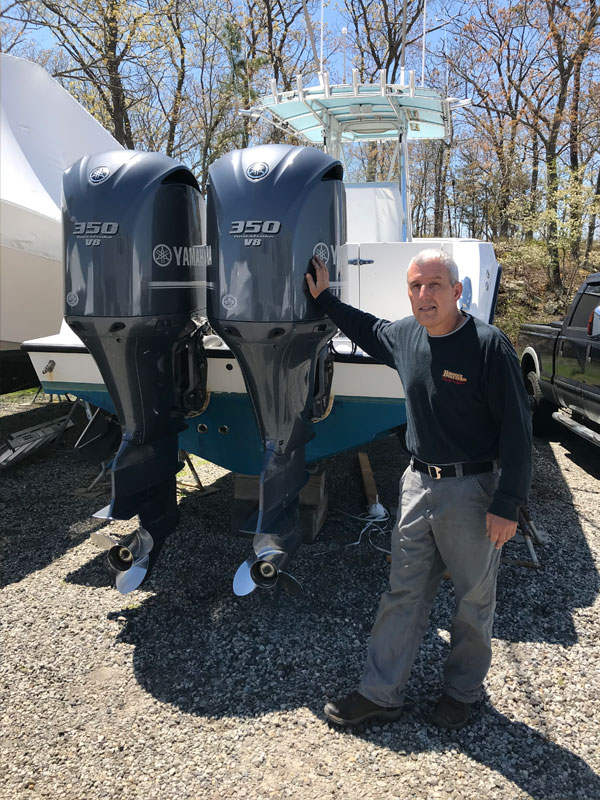 Our marine technician Don Kacenski has spent the last 21 years working on all manner of boats over at Thimble Island Marine in Branford. A third generation mechanic, Don’s father began his mechanic’s career in the Korean War and his grandfather was a World War One Army Air Force mechanic. Don is a certified Evinrude and Mercury mechanic and holds a variety of AMTech

certifications as well. Like most of the crew here at Brown’s, Don grew up around boats and when he’s not here at Brown’s, you can find him playing in the waters off the Thimble Islands in his Carolina Skiff searching for stripers. Don also enjoys spending time at the New Haven Raccoon Club in Durham.